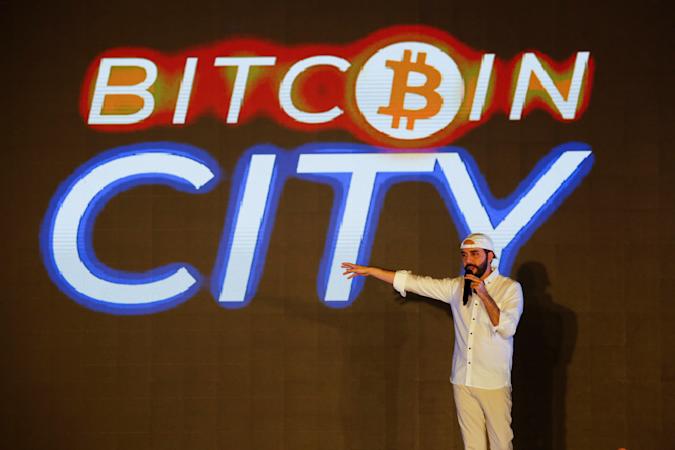 El Salvador’s ‘Bitcoin City’ plans. El Salvador, the only country in which bitcoin is a legal tender, is going to build an entire city based on the largest cryptocurrency by market value, President Nayib Bukele told a raucous crowd in a Saturday night presentation at Bitcoin Week in El Salvador. “Bitcoin City” will be located along the Gulf of Fonseca near a volcano. The government plans on locating a power plant by the volcano to provide energy for both the city and bitcoin mining, the president said. 📰 Coindesk

Square releases white paper for decentralized Bitcoin exchange. Square, the financial services company helmed by Twitter’s Jack Dorsey, wants to do more with Bitcoin than just allow people to buy it on its Cash App. It’s working on a way to let people trade BTC and fiat on the type of decentralized exchange that’s common to Ethereum. 📰 Decrypt

Nearly one-third of hedge fund managers plan to invest in crypto. Traditional alternative investors are slowly warming to cryptocurrencies, according to a new study out today from big four accounting firm Ernst & Young. Thirty-one percent of hedge fund managers, 24% of alternative investors, and 13% of private equity managers said they planned to add crypto to their portfolios in the next one to two years. 📰 Coindesk

Mercado Libre to allow crypto investments through a digital wallet. MercadoLibre Inc. is stepping up its foray into the crypto world through its digital payments app. MercadoPago customers in Brazil will soon be able to buy, sell and hold cryptocurrencies using their digital wallets, as the largest Latin American company by market capitalization looks to expand its lineup of financial products. 📰 Bloomberg

Celsius Network is a leading crypto savings and lending app where you can earn up to 17% in interest per year paid every Monday. I use the app myself and it’s always a joy to start the week with a pop-up notification from Celsius with the incoming reward. Earn $50 worth in BTC with your first transfer of $400 or more by signing up with my Referral Link.

Sneaker giant Adidas says the metaverse is exciting. The German multinational shoe and sportswear corporation Adidas recently announced the company has partnered with the cryptocurrency exchange Coinbase. Two days prior, The Sandbox tweeted about the popular shoe company and showed a video clip of Adidas real estate in the Sandbox metaverse. The Sandbox is a blockchain-based virtual gaming world where players can build, own, and monetize their gaming experiences. Besides a sizable plot of metaverse land shown in the video clip, it’s currently unknown what Adidas will be doing in The Sandbox virtual world.📰 Bitcoin News

NFT declared “Word of the Year” by Dictionary Stalwarts Collins. Notable wordsmith, Collins, of “the Dictionary” fame, has announced the winner of its annual terminology contest. It’s official, despite actually being an abbreviation, NFT is the word of the year 2021. NFTs rose to prominence throughout 2021, a period that also marked the breakout year for the non-fungible token. A remarkable success, galvanized by a wide range of genuinely incredible projects, coupled with a dash of celebrity-driven hype.  📰 NFT Plazas

Grayscale reports the metaverse offers massive trillion-dollar opportunities. Grayscale, a crypto investment goliath, released a report earlier this week on the opportunities the metaverse offers. According to the new report, titled “The Metaverse, Web 3.0 Virtual Cloud Economies,” the metaverse represents trillion-dollar market opportunity. The concept of “metaverse,” has been gaining traction and extra attention from all sorts of investors in the past few weeks, especially since Mark Zuckerberg’s announcement about Facebook’s rebranding to “Meta.” The report claims that, observing the current pace of development, the metaverse has the potential to compete with Web 2.0 organizations that are worth around $15 trillion today.  📰 NFT Plazas